Comparison Between a Bubbler and a Bong 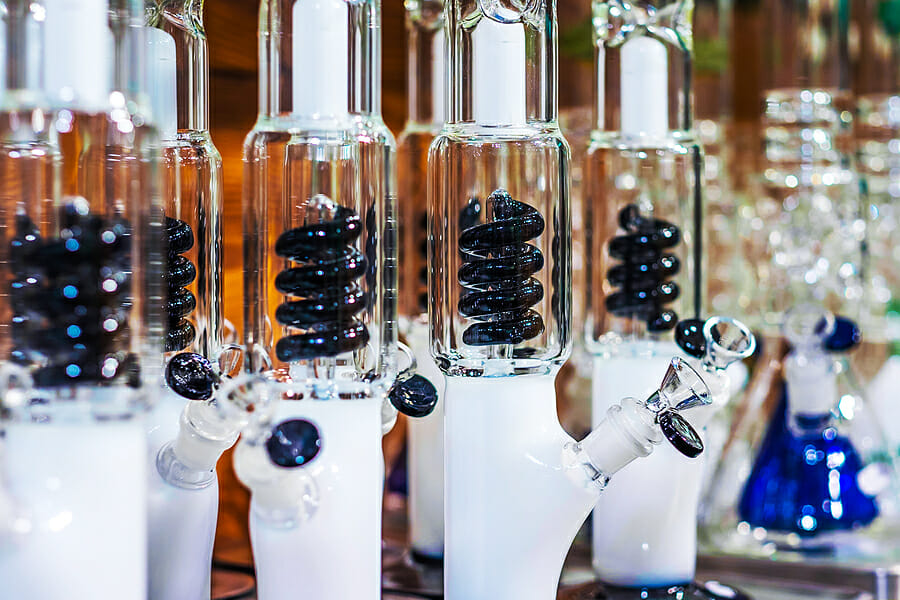 It does not matter if you are new to the scene or a long-time smoker, many people have no idea what the difference between a bubbler and a bong is. In most cases, people will purchase one based solely on having seen one used with their friends or because they think one looks cooler than the other. While many people think bongs and bubblers are the same thing, there are some key differences between the two. To understand a little more about these glass pipes, here is a closer look at the similarities and differences between bubblers and bongs.

The Differences between Bubbler Pipes & Bongs

Size of the Water Pipe

When looking at a bong and a bubbler, the most obvious distinction between the two is their size. Bongs are larger, bulkier pipes and are typically placed on the floor or table during use. Bubblers, on the other hand, are a smaller option designed to fit in your hands.

Portability of the Water Pipe

Due to their size, bubblers are traditionally more portable than water bongs. Their hand-held size and better durability make bubblers the better choice for travel. While you can travel with a bong, due to its larger, bulkier size, you will risk damage to your water pipe without the proper gear to keep it protected. 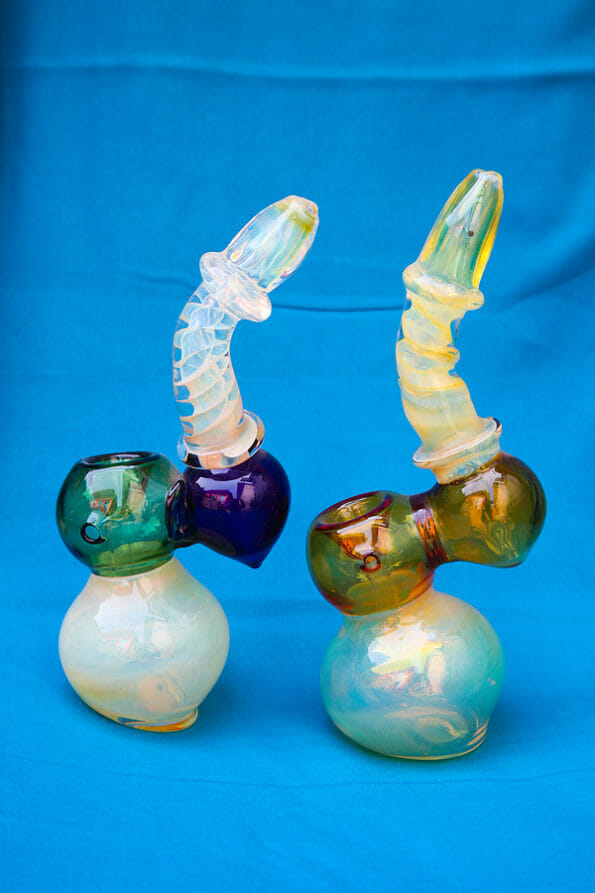 Amount of Smoke per a Puff

Since bongs are larger, they can hold a higher smoke volume than the smaller bubbler device. Therefore, if you have a higher tolerance, or are just looking for a larger (and more powerful) hit size, you will want to lean more towards a water bong. Since both bubblers and bongs use water filtration, they have a similar flavoring. Nonetheless, due to its size, a bong is able to provide a smoother, overall hit than a bubbler.

Unlike bubblers (which have a built-in bowl), bongs require an additional bong bowl piece. This separate bong accessory is used to operate the bong and to hold your dry herbs. As long as you know the size of your bong, you can purchase a variety of bong bowls (from large to small) to allow for a wide range of hit sizes.

Typically to clear a bong, you will need to remove the bong bowl. Bubblers, on the other hand, almost always have some form of carb hole present. The carb hole will be located somewhere in the vapor path of the pipe and is used to create your desired hit size. Once the desired size for the hit has been reached, you simply remove your finger from over the carb hole and inhale the smoke. 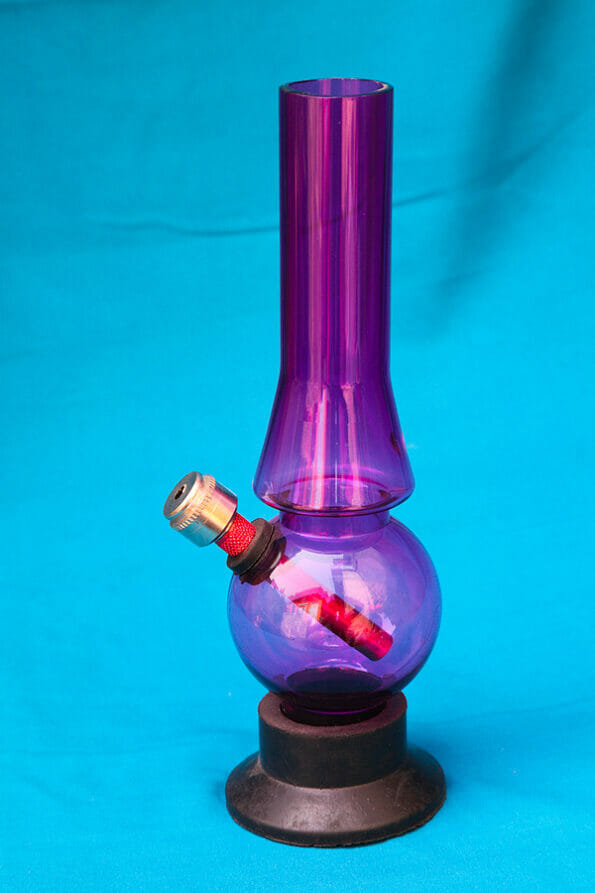 Use water to filter smoke

Both water bongs and bubblers use a water filtration system to smoke the dry herbs. The water helps to cool and filter the hit, removing particles from the smoke to provide a smoother, more flavorful hit. Due to this, bubblers and bongs tend to be favorite among dry herb smokers. This is especially true in relation to traditional non-water pipe alternatives.

While both bongs and bubblers filter the water, bongs filter the smoke better than bubblers. This is because of the larger size of a bong. The extra water volume a bong can hold provides more filtering (and cooling) capabilities for the smoke. Therefore, while both will provide a smooth hit, a bong can offer you the ultimate smoothness experience.

Need To Have The Water Changed Regularly

It does not matter whether you use a bong or a bubbler, it is easy for the water to become nasty. Due to this, both pipe options require the user to regularly change out the water. If the dirty water is not removed, you risk the pipe getting dingy, sticky buildup through the body of the device. This, in turn, will create the need for longer and more diligent cleaning. When you are finished smoking, always remove the water from your bong or bubbler before storing it.

Meant For Use With Dry Herbs

Bongs and bubblers are traditionally designed for use with dry herbs. If you are looking for more versatility, you want to consider a multi-functional device like a vape pen or box mod. Wax and oil concentrates are best smoked (or vaped) in specially designed dabbing devices like nectar collectors or dab rigs. While water bongs are similar to a dab rig, unless you plan to purchase the additional necessary accessories, concentrates will not work in your device.

A Variety of both Bubblers and Bongs

Like other non-water pipes, bubblers and bongs can be found in a large assortment of sizes, models, and designs. Bubblers are often made out of glass, silicone, or a hybrid of the two materials. Bongs can also feature additional special functions. Whether you are looking for more durability, better portability, or just a great design, there are tons of bubbler and water bong selections to choose from.

Whether you choose a bong or bubbler, both are very easy to use. For a bubbler, you will need to pack your dry herbs into the built-in bowl. Then holding the carb hole, light the dry herbs, inhaling until you reach your desired hit size. Then release the carb hole, inhaling the smoke (hit). To use a bong, simply pack your dry herbs into the selected bong bowl and place it correctly into your bong. Light your dry herbs, inhaling until you reach the desired hit size. Then remove the bong bowl and inhale the smoke (hit).

Just like bubblers can vary in bowl size from one model to the next, you can purchase a wide range of bowl sizes for use with your water bong. Due to the size differences, smokers can choose to smoke a pipe featuring larger bowls to hole a good amount of dry herb, or the ability to opt for a smaller, more diminutive selection.

Is a Bong or Bubbler Better?

Which is better is all a matter of personal preference and the kind of situation you are planning to use your pipe. For example, if you are looking for a smaller, easier to travel with option, a bubbler is the better selection. However, if you are looking for smoothness and more percolation, than a bong is probably a better choice. In the end, neither a bong or a bubbler is inherently better than the other. It is all a matter of what suits your tastes and situation.

The Benefit of Using Water Bongs and Bubblers

One of the biggest benefits of using water bongs and bubblers is the hit itself. Unlike traditional non-water pipe options, bongs and bubblers use water to filtrate and cool the smoke. This filtration and percolation system allows water pipes to provide a smoother overall hit.

What is a Swan Bubbler Pipe?

Where to Buy Bubbler Pipes and Water Bongs?

If you are looking for a nice bong or bubbler, you need to look no further than your local or online head shop, smoke shop, vape shop. While local shops can provide you with an array of products, you will find a much larger variety to choose from online.

These days, you can order weed online in the comfort of your own home. There are also many websites that sell different brands of bongs, joints, and pipes. The possibilities are endless with the online world!