Why Are Stop Signs Red? 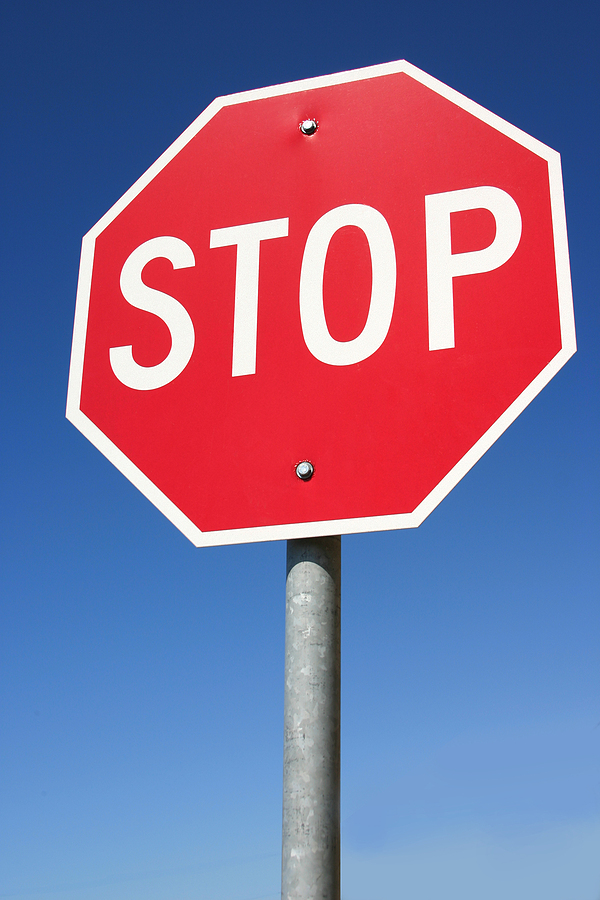 You’ve probably heard someone use the old expression, “I’m seeing red” to indicate that they are either angry or very upset. But people “see red” every time they walk, ride a bike, or drive a motor vehicle on local streets: on stop signs. When someone sees a stop sign, they may be relieved that there is a protection system in place to enhance traffic safety, or they may be a little angry that they can’t speed along their merry way. Who wants to be inconvenienced by a stop? But stop signs are an integral part of road safety, and ignoring them can and will have dangerous — perhaps fatal — consequences sooner rather than later.

The stop sign is an official regulatory sign that requires drivers to stop. It does not control speed, however. Today, it always uses the familiar octagonal shape with red background and white border and capital letters reading “STOP.”

There are three purposes for a stop sign. The first and most important purpose is safety: protecting occupants of a vehicle and any crossing pedestrians walking or riding a bike, thus reducing the chances of a potential collision caused by motorists driving too fast (or simply too distractedly) along a populated street. Second, stop signs help prevent crashes in general: something that can have significant cost, time, and traffic-flow repercussions in addition to a possible loss of life. Third, stop signs facilitate the smooth flow of traffic. They are part of the “rules of the road” that enable large volumes of people to use the same spaces in a coordinated way without supervision, rather than in an experience akin to herding a busy pack of willful cats going any which way they please.

The Manual on Uniform Traffic Control Devices (MUTCD), published by the Federal Highway Administration, defines the design, application, and placement of stop signs and other traffic control means for all public streets, highways, and bikeways. It is the rule of law nationwide. The Manual includes guidelines regarding:

A stop sign is a very valuable way of helping drivers and pedestrians decide who has the right of way at an intersection. Stop signs are located where vehicles are required by law to stop. The sign may be accompanied by a stop line and/or the word STOP painted on the pavement, or even blinking lights. There is sometimes a “limit line” painted a few feet in front of the stop sign, too: if such a line exists, after coming to a full stop, drivers can pull forward to better view oncoming traffic. If two lanes of traffic exist on the same approach path, the stop sign must be visible to both lanes.

If there is a marked crosswalk, a stop sign can be placed four feet in advance of the crosswalk. In cases where there may be visibility issues with the sign, a supplementary sign can be placed on the left-hand side of the roadway, in the median or overhead. Also, a “STOP AHEAD” sign can be used to prompt oncoming traffic.

Unfortunately, stop signs are often ignored or treated off-handedly — ever hear the term “California stop,” indicating a sort of roll-through the sign space? If ignored, unsafe conditions may occur, including a rise in behaviors like speeding up or accelerating too rapidly to make up for lost time.

Right-of-way rules establish a means for vehicular traffic and pedestrians to decide “who goes first,” thus helping maintain safe travel for all parties. In most situations, stop signs in two directions are usually adequate in defining the right of way. A four-way stop is applied only when road conditions indicate the greater need for a stop in all directions.

Four-way stop signs are installed when:

Note that the law does not allow any party to insist on their right of way. This is a law of courtesy and common sense. If another driver does not yield when they should, it is the first driver who should let the other driver proceed without employing aggressive behavior.

The principles are the same for all driving situations. First, be watchful and not distracted when driving a vehicle, riding a bicycle, or walking. Second, when driving, slow down and watch for signs. Third, come to a complete stop, moving forward if there is difficulty seeing only after completing that full stop. Fourth, look around to see if any cars are competing for entry into the intersection. Fifth, apply the rules for appropriately engaging the right of way.

Here are some useful guidelines to follow with a four-way stop that should keep traffic flowing smoothly and maintain safety for all:

Why are stop signs red?

It’s an ancient concept: red designates danger, and that’s an association that became adopted worldwide throughout history. But the story goes deeper than that.

Before the early 1900s, there was limited signage on roads and a lot of confusion was caused by horses, wagons, and bicycles, so William Phelps Eno started a movement to create traffic signs at intersections.  In 1923, the Mississippi Valley Association of State Highway Departments developed some recommendations about street sign shapes, which led to the octagonal shape used today.

By 1935, traffic engineers created some uniform standards for road signage known as the Manual on Uniform Traffic Control Devices, recommending a yellow sign with black letters. They had also considered red, which had been used in electric traffic lights since 1912. The problem was that, at the time, no red dye existed that did not fade over time.

By 1954, the Manual on Uniform Traffic Control devices was changed to adopt a stop sign that was red with white letters, which matched up with the standards for railroad and traffic signals. At that same time, sign makers had started to use a fade-resistant porcelain enamel that corrected the fading issue, facilitating the change to red-and-white signage by the Joint Committee on Uniform Traffic Control Devices.

Despite its history being a bit more recent than many may believe, red now has a deeply ingrained and irrefutable association in every American motorist’s mind: red means stop. And it’s a vital association to internalize because disregarding it can and has led to the senseless loss of many lives over the years. The “California stop” or outright ignoring the warning may save you a few precious seconds on your route, especially if the roads seem clear of anyone but you. But consider: is it really worth it?

If you’re looking for traffic delineators, barricades, or any other traffic control supplies, contact Worksafe Traffic Control for more information.