Why We Celebrate Occasions with Fireworks 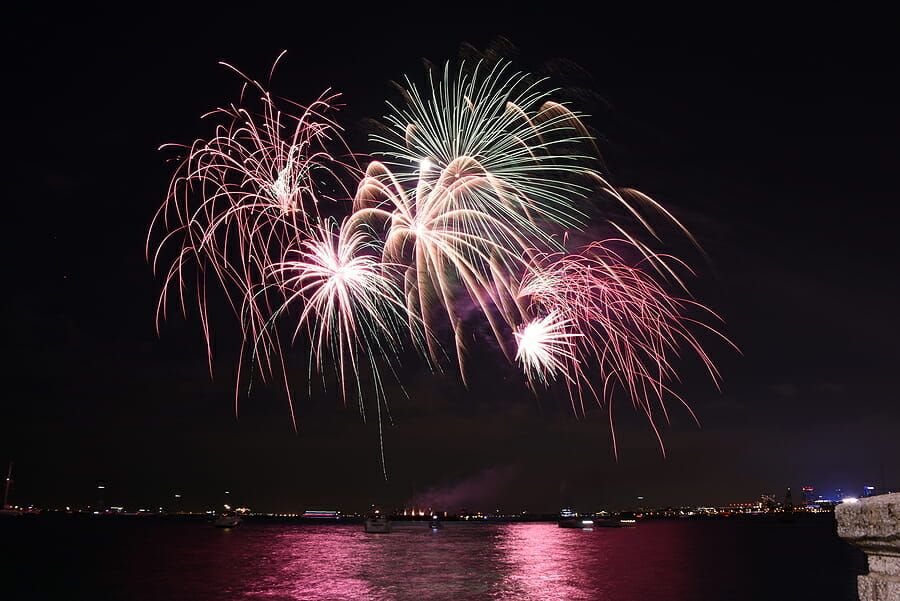 On holidays — even minor ones — it is common to find a fireworks display to view somewhere around your city. We also let loose fireworks for special occasions like sports games and movie premiers. These days, regular people can buy bulk fireworks and set them off for personal events like proposals and weddings.

But why? How did fireworks become a must-have for bringing together the community and expressing intense joy?

The Origins of Fireworks

The very first fireworks were the result of an alchemical accident in Ancient China. In an attempt to discover an elixir of immortality, Chinese alchemists working between 600 and 900 C.E. mixed saltpeter (also known as potassium nitrate) with sulfur and charcoal. When exposed to a flame, the concoction fizzled in enchanting sparks, gaining the name huo yao, or fire drug.

It didn’t take long for the fire drug to be loaded into bamboo tubes and integrated into Chinese cultural celebrations. At first, the tubes were tossed into a central fire, where they would explode with loud pops and cracks. Later, the tubes were lit and held, like modern-day sparklers, or fused together and lit, like firecrackers. The exciting lights and sounds added to the exhilarated party atmosphere of holidays like the Spring Festival for Lunar New Year and celebrations for new or beloved emperors.

Slowly, gunpowder spread around the world — and fireworks with it. Sometime between 1600 and 1800, the Chinese began adding more chemical substances to their firework mixtures as a means of tinting the sparks and smoke different colors. At first, this was a tactical choice for military communications, but when the Italians began experimenting with colorful fireworks in the same manner, they did so for entertainment purposes only. Italian pyrotechnicians were also the first to launch fireworks into the sky, using a cone-shaped container to channel the explosion and a particular shell to create a more resonant boom.

However, long before these improvements to fireworks, Americans were already buying and using pyrotechnics in their own celebrations.

Europeans had fireworks as early as the 13th century, and by the 15th century, fireworks were common sources of public entertainment, especially during religious festivals. Thus, when Europeans started colonizing the New World, many brought pyrotechnics with them as a means of perpetuating their cultural expressions of excitement and joy.

The use of fireworks as a means of celebrating quintessentially American holidays is as old as the nation itself. Reports from the very first Independence Day celebration at the end of the American War for Independence include descriptions of fireworks displays; the edition of the Virginia Gazette published on July 18, 1777 reads: “The evening was closed with the ringing of bells, and at night there was a grand exhibition of fireworks, which began and concluded with thirteen rockets on the commons, and the city was beautifully illuminated.”

Over time, fireworks came to replace more traditional public displays like musket and canon salutes because pyrotechnic displays were safer, less expensive and more visual for gathered crowds. By 1898, a reporter would remark that “the American Fourth of July is the greatest event the maker of firecrackers knows.”

The Future of Fireworks

Today, Independence Day is certainly an important holiday for fireworks displays — such that many people buy bulk fireworks as early as March to prepare the perfect sky show for family and friends — but most other American celebration days see illumination, as well. Though the U.S. does have a strong tradition of celebrating with pyrotechnics, the rest of the world does, as well. It is a human experience to enjoy dazzling displays of light and color accompanying resounding booms, pops and cracks, so it was natural that Americans would whole-heartedly adopt fireworks into almost every celebration, from major national holidays to intimate events like weddings and birthdays.

Though firework technology is centuries old, modern pyrotechnicians continue to alter and improve the technology of fireworks. Soon, American revelers could utilize fireworks that are made from eco-friendly materials and that can be reused or recycled, helping to reduce the waste that often accompanies holidays and public celebrations. What’s more, improved firework design could result in the ability to more easily create words and designs illuminated in the sky.

From the very beginning, fireworks have been used to amplify the thrill and joy of celebratory events. America isn’t alone in using pyrotechnics during holidays; everyone around the world loves a good fireworks display, especially in the midst of a festive evening.