Why should Kundli Matching be done before Marriage ? 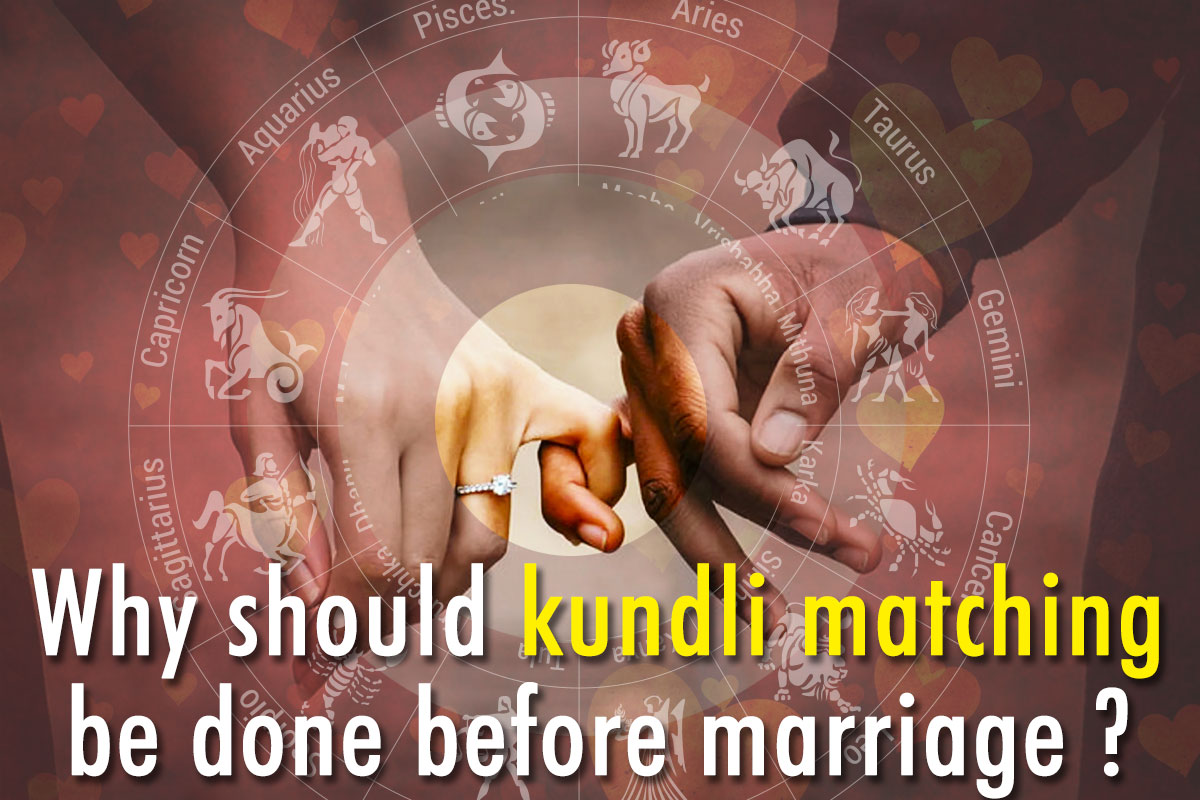 Love is the essence of life and while some of us fall in love, for some it is destiny that plays the part in bringing love. Marriage is one of the most sanctified relationships between two individuals as they commit to one another to spend their life together through life’s ups and downs in sickness and in health. However, in recent times, we find that marriages are ripped apart for the flimsiest reasons arising out of ego or emotions, with no regard to prudence. Communication, intimacy, and emotions form the crux of a happy marriage, and these factors kindle the fire in the relationships. Vedic Astrology has played a significant part in bringing two individuals together by analysing their horoscopes or Kundlis. It also offers various remedies for problems that crop up in relationships.

The process of marriage horoscope matching or Kundli matching is an important aspect before finalising marriages. It is believed that poorly matched Kundlis or horoscopes end in discord if the defects/doshas are not identified properly and remedied. Marriage Kundli matching consists of matching eight aspects or kootas.

Horoscope matching is performed before marriage to check the compatibility of the partners. The shastras consider man and woman as a single entity post marriage. One partner’s destiny and luck have their effects on their partner leading to either a beautiful sustaining relationship or a miserable damaging relationship.

Future aspects of the marriage

Thefuture aspects of the couple, including career and finance, are matched using the Guna or Ashtakoot parameter. To test the harmony between the couple eight gunas are taken into consideration. Each guna is assigned a numeric point which when summed up comes to 36 points. An acceptable alliance happens only when 18 or more points match up. The higher the score, the higher is the compatibility aspect.

The standards for guna matching:

Other than the above marriage kundli matching is mostly done to check the Manglik dosh as well as the placement of Shani and Rahu in the horoscopes. Manglik Dosh referes to the position of Mars in the horoscope and is considered inauspicious. The placement of Mars is important while checking the compatibility of the couple. Mars is a malefic planet and considered inauspicious for marriage compatibility as its negative impact affects marriage and life after marriage.

Aspects to check in Manglik Dosh

The person afflicted by the Manglik Dosh is known as Manglik and such person may remain unmarried throughout their life due to the malefic effects of Mars. When Mars is placed in the 1st, 4th, 7th, 8th, or 12th houses of an individual’s birth horoscope chart, they are considered Manglik. It is only possible to match a Manglik with another Manglik or else the fear remains that the negative effects of Mars will affect the partner’s life and the longevity of marriage.

It is also important to note that different places have different methods of marriage horoscope matching. While in North India people check the Guna Milan, which checks the compatibility of eight gunas, towards the south people check for additional matching of two doshas—Rajju and Dheva doshas.

Kundli matching is essential as it provides astrological remedies for all obstacles including Manglik Dosh that play a crucial role in ensuring the longevity of marriage and the ways to lead a happy and harmonious married life.