The Origins of Robotics in Manufacturing 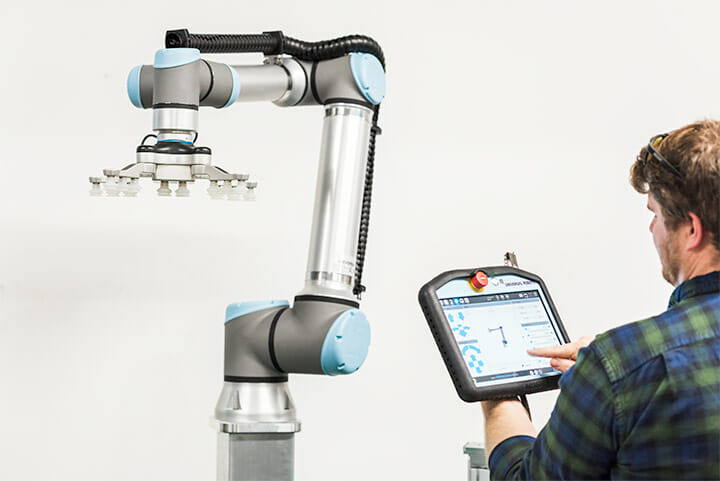 For a long time, robots have been a central theme in literature and science fiction. It was not until recently that robots became an integral cog in our workforce. The fictional Three Laws of Robotics by Isaac Asimov is a favorite with most Sci-fi lovers, and while it is a fictional work, these rules still define much of how our robots work today.  Collaborative robots work safely alongside humans, which was not always possible.

History of Manufacturing Robotics between 1939 and 1979

The growth of the computer and the rising popularity of NC (Numerically Controlled) machines helped to create the first industrial robot. In 1937, Griffith Taylor created the earliest industrial robot that fits into an ISO definition of a robot, and it appeared in Meccano Magazine in 1938. The small industrial robot had a design that mimicked a crane, and a single electric motor provided its power. It consisted of five axes of movement, which included a grab and grab rotation. Paper tape with punches that energized solenoids created movement in the controls.

The paper tapes programmed the robot to stack wooden blocks in patterns. George Devol was the firs to place a patent on the first industrial robot in 1954. This robot could transfer objects from point “A” to point “B” within a 12 feet distance. In 1956, Devol founded Unimation to build the patented robot, and he came up with the name “Universal Automation.”

Unimation created UNIMATE in 1962, which was the first robot to be used by a significant player in the manufacturing field. General Motors was the first manufacturer to use it in its New Jersey plant in the same year. Victor Scheinman built the Stanford arm in 1969 at Stanford University. The arm was a fully electric, six-axis articulated machine.

This novel technology paved the way for manufacturers to make use of robots in assembly lines and for welding. Victor later sold the robot designs to Unimation, which developed them further. In 1975 in Europe, ASEA built the ASEA IRB, which was the first fully electric robot. The ASEA IR was also the pioneer in the microprocessor controller robot, which utilized the first chipset by Intel.

Vicam and Unimation created the PUMA robot arm in 1978, in collaboration with General Motors. The PUMA robot arm was initially used in assembly arms, and robotic researchers still use it to date. In 1979, OTC Japan built the first welding robots with a dedicated arc.

Modern Industrial robots from 1980 to Date

From 1980 onwards, new robotics increased, with Takeo Kanade creating the first robotic arm in 1981 that had motors directly installed in the joint, and had more speed and accuracy than the previous robots.

In 1988, Yaskawa America Inc. released the motorman ERC control system, which could control at least 12 axes, the highest possible number then. In 1992, FANUC robotics built the prototype of a smart robot. The Motorman ERC system upgraded to support at least 21 axes in 1994, which was upgraded in1998 to 27 axes, plus the ability to synchronize four robots. In 2008, the first cobot (collaborative robot) was installed at Linatex, a Danish rubber, and plastic supplier. They opted for the robot to stay on the floor instead of locking it in a safety fence. Rather than hire a programmer, they programmed the robot via a touchscreen.

Today, we have more cobots that work alongside humans, and the fenced-off industrial robots are almost obsolete. The future of manufacturing robots looks bright as the industrial robots make work easier and remove the load off, humans. Robots can work continuously and have far much better accuracy than humans.

There are myriad advantages tied to using robots, but chief among them all is the amount of work a robot can do in comparison to a human. Industries are profit-oriented, and the more production, the better. The current industrial robots we have today have considerably evolved, and we have not seen the last of it as more research and innovation is put into developing better and more efficient robots.