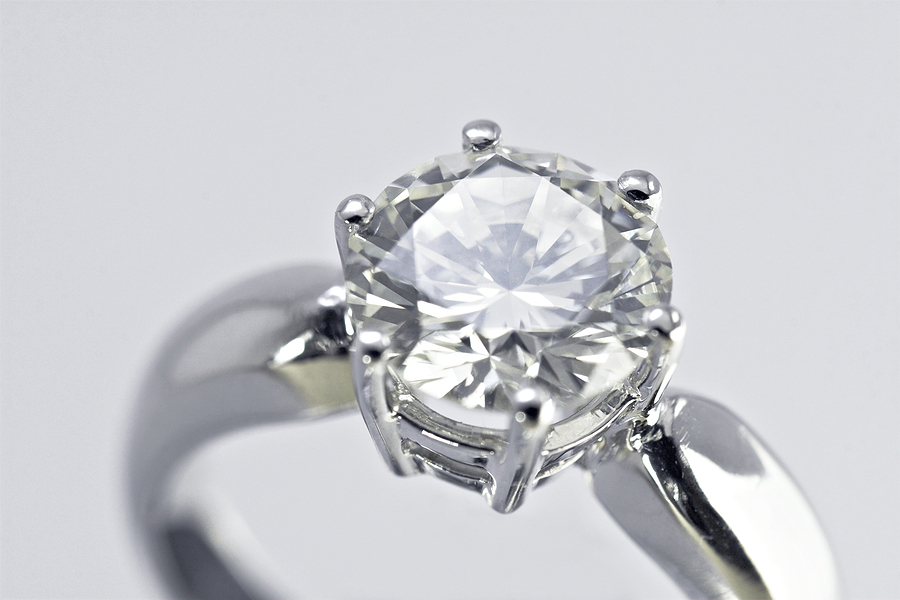 Moissanite is an eco-friendly alternative to diamonds. It is the second hardest mineral on earth, ranking just below diamond. And it’s also one of the most affordable! In today’s post, we’re going to be discussing moissanite and how you can tell the difference between a genuine moissanite stone and a fake one from all those other jewellers out there. Moissanites are graded with four Cs – Clarity, Colour, Cut and Carat – so let’s break them down together.

Clarity: If you are unaware of what is moissanite, then you probably haven’t heard about its clarity. Moissanite is completely pure and has a higher clarity than diamond. It’s flawlessness makes it difficult to tell the difference between moissanite because they are so much clearer. However, when comparing both side by side, you should be able to notice differences in light reflection – diamonds have more of an orange-ish glow which enhances their sparkle, while moissanite emits a whiter shine.

Moissanite has very few visible inclusions compared to diamonds which can sometimes be too milky for people’s liking, especially if you have a higher budget! Diamonds with high clarity allow more light through so they sparkle even brighter, whereas moissanites are less transparent due to their many microscopic needles that stick out from within the stone – this is what allows it to refract light; much like how actual stars twinkle at night!

Cut: Moissanite stones come with flawless cut grading (AAAA), whereas diamonds only receive grades ranging from outstanding/excellent for round shapes to poor or fair for emerald cuts. The way that most jewellers will test if your stone is real is by using magnification devices and checking for graining, air bubbles inside the cut, and other defects.

This one may seem confusing as both stones are cut into round shapes, but there will always be slight differences when looking closer. For instance, diamond cuts usually vary from flawless to very good, whereas moissanites are graded as AAA. Moreover, moissanite stones have more of a rainbow effect going on, whereas diamonds are completely colourless.

Carat: The size of the stone also plays a role in determining its authenticity as moissanite is available in smaller carat sizes (0.25ct to 0.75ct) than diamonds which go all the way up to 100+carats! A bigger stone for an affordable price is definitely something that you’ll want to invest in, especially if it’s your wedding ring or anniversary present from your better half. Additionally, the carat of moissanite is measured on the crown (the top part), while diamonds are weighed from the bottom.

Colour: Moissanite stones come with colour grading ranging from D-Z compared to G for diamond rings – most jewellers won’t be able to tell this difference, but they will certainly notice when you put both side by side and compare their sparkles! Just like clarity, diamonds also come with different grades of clarity (FL, IF and VVS) depending on the number and size of inclusions. Plus, moissanite is among the rarest stones in nature, so you can be assured that your stone is one of a kind, just like diamonds!

Why choose moissanite over other crystals?

Conclusion: So whether you’re looking for a diamond alternative, an eco-friendly gift that’s also affordable or just want to treat yourself with something different, we hope this 101 on the four Cs of moissanite has been helpful!