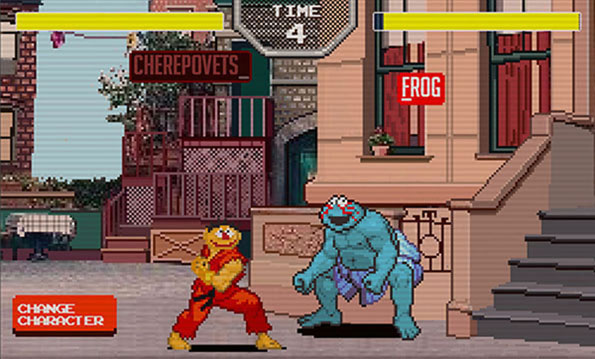 This is a screencap from the new playable game, Sesame Street Fighter. It’s exactly what it sounds like: Sesame Street meets Street Fighter. The mash up you never knew you needed, but now you can’t live without. You must defeat the alphabet to stand a chance! But for real, though. Instead of mashing all the buttons at once as I am wont to do, you’ve gotta type in a series of words that pop up on the screen. Choose from Cookie Monster as E. Honda, Grover as Dhalism, Oscar as Blanka, Ernie as Ken, Bert as Ryu, and Elmo as M. Bison. Hey, where’s Big Bird and the rest of the gang? I’ll tell you where: being decent muppets back at Sesame Street. They know better — violence is NOT the answer. Then again, neither is living in garbage, gorging yourself on cookies 25/8, or spending the majority of your life soaking in lukewarm bathwater, serenading a rubber duckie. Think of the children!