Gold Roses as a Gift? 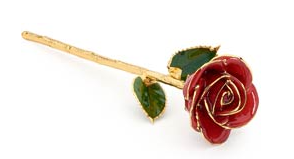 The rose has long been a symbol of love and devotion. Today it is possible to go a step further – how about a gold plated Eternity Rose?

History of the rose as a gift

Giving roses as a symbol of love and devotion goes right back to the dawn of human civilization, and is not some fly by night fad creation of recent times as so many ‘traditions’ we have seem to be.

Being a soft and pliable metal, there is no doubt that jewelers have made replicas of roses for thousands of years. For their skill and ability, jewelers can’t quite replicate the perfection of nature. The answer therefore is to dip a rose in liquid gold. Being a hot metal, most roses would disintegrate entirely when dipped in liquid gold, leaving nothing to adhere to!

One company has found the way forward. Eternity Rose is a company of master jewelers who explain on their site how they create a 24 karat Gold Dipped Rose: “Through a process called immersion electroforming, we utilize both proprietary formulas and detailed processes which initially layer the rose with pure copper in order to ensure the rose’s integrity is preserved. This copper provides a texture-sensitive layer required to maintain exquisite detail, and a compatible base for precious metals to adhere to. Following its light copper coating, it is then dipped in nickel to give it strength and additional structural integrity. We have stringent quality controls and check for imperfections with each layer, so no rose makes it to the final gold-dipping stage without extensive screening. Only after it has been screened and approved is it then allowed to move into its final destination: the 24 karat gold-dipping baths.”

The 60 step process developed by the team is unique. While some companies have attempted to replicate this, none have succeeded with the same effect and quality. 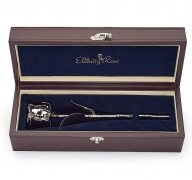 Give an eternal gift of love today

If you give someone a rose it may last a week. Give them a gold dipped rose and it may well outlive them. A gold dipped Eternity Rose is a gift that may well become a family heirloom that will show your passion and love for your special one for generations to come. What could show a greater love than that?

Via: Gold roses as a gift?