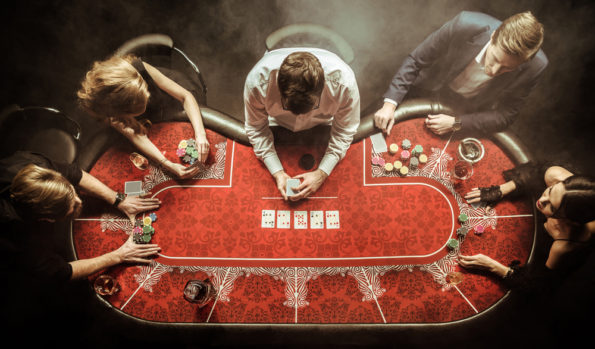 There’s a reason why the games we largely find at casinos are called “games of chance.” For the most part, they are entirely luck-based where the player is only really in control of how much money they are willing to bet. People have always argued over the odds at casinos and whether or not casinos are able to influence those odds. Casinos will protest that most games are the result of random generators or random deals but the odds will always fall in favor of the house. Lucian Marinescu from OnlineCasinoGems.com says, “the house is usually going to have better odds than you at the average casino game.” It makes sense, if the odds didn’t favor the house then the casino would lose money and go out of business.

While reading this article if you get curious about poker terminology you can refer to this article for an extensive list of terms.

The debate over poker being a game of chance (luck) or a game of skill is both a philosophical one and a legal one as it’s definition has legal implications. Unlike pumping quarters into a slot machine run on a randomized generator, poker has a set card count and a book full of rules, making it seem more like a game you could master given enough practice.

And then there’s the human element. You can for sure raise your odds of winning by learning about human behavior, especially if you play with the same people consistently. You’ll learn to tell when they’ve got a good hand or when they are just bluffing. Is that enough to tip the odds in your favor consistently enough to call it a skill or does luck will trump all?

Are Poker Winners Lucky Or Skilled?

Pete Etchells of The Guardian.com points out a study that made a strong argument that poker isn’t exactly the game of skill that many make it out to be:

“In the experiment, 300 participants were divided into “expert” versus “non-expert” groups, depending on whether they had an interest in the game or not. Then, they played 60 hands of Texas Hold’em in which the deals were fixed so that players could get consistently good, bad or neutral hands. In a nutshell, the researchers found that there wasn’t much difference in the final amounts of money that the experts accrued compared with the non-experts, with the implication that skill level didn’t have much effect on the outcome.”

Luck has the most impact when only one game is played, but professional poker players play 100’s of rounds and this is another place where strategy and a cool head can greatly increase your odds of winning by making the most money over time in a tournament. TheEconomist.com wrote about  Steven Levitt and Thomas Miles, who analyzed play during the 2010 World Series of Poker.  They found that skilled players made an average return on investment of over 30%, compared with -15% for others. Most investors dream of odds like that, these players made it happen using skill and strategy.

Another element of skill that could impact poker is math. People who are better at math could definitely have an advantage in quickly mentally calculating basic probability, narrowing hand ranges and calculating pot odds. But that won’t stop you from getting dealt a bad hand or getting a bad outcome even if you made the right strategic decision. So is it luck or skill? The answer isn’t exactly black or white. Skill comes into play but luck will always play a big part.

What About Video Poker?

According to GamblersDailyDigest.com, you can influence your odds at winning video poker in several ways. “If you choose an exact machine, receive comps for your play, and use optimal video poker strategy, you will undoubtedly decrease the house odds significantly and walk away with cash in your wallet.” While there is still a large amount of luck involved, you could minimize loses and tilt the odds, ever so slightly, in your favor.

For some great online video poker game reviews, check out this article.

A Few Un-technical Ways You Can Influence A Poker Game

Be In The Best Position

There is a strategy about where you sit at the poker table. Erik Arneson from TheSpruceCrafts.com explains it like this: “The best position in Texas Hold ‘Em is “on the button.” When you’re on the button, you’re the last person to act in three out of the four betting rounds—after the flop, the turn, and the river. When it’s your turn, you have full knowledge of how many other players are still in the hand and you can make a much more informed decision on how much to bet if any.

The worst position is the small blind. After the flop, the turn, and the river, you must act first. Sometimes you can use this to your advantage by playing aggressively, but it’s much better to act last.”

Know The Other Players

You don’t have to worry about this in video poker but psychology plays a huge role when you’re playing with other human beings. Knowing your opponents can make or break your game. Study how they move, what their betting strategy is and learn to tell when they are bluffing or have a great hand. If you want professional poker on TV you’ll notice many wear sunglasses at the table to make sure their eyes don’t give too much away.

Only Play In Good Games

“If you can’t spot the sucker in your first half-hour at the table, then you are the sucker.”

Matt Damon in the movie Rounders, 1998

When you get to choose who you play with, always pick games where your chances of winning are higher. If you’re the number one poker player in your group of friends then your chances of winning consistently are high. If you join a  new group of ultra-competitive players with several members being ex-professionals then your odds decrease just as greatly. Choose your fellow players wisely.

The contents of this post are geared towards the United Kingdom.